I have worked with some fantastic children on creative projects writing books, making films and creating original artwork. Click the links below to see some of the examples of my work.
FILM -- CREATIVE WRITING -- AUDIO BOOKS -- VISUAL ART


FILM
'Greenman' - Year 2, January 2020
This film project was the culmination of a creative writing and drama project with a Year 2 class. The film was written and designed by the children and features their poetry about the Green Man legend.


'The Rise and Fall of Julia Caesar' - Year 6, July 2018
This story transports Shakespeare's play from the corridors of power of Ancient Rome, to corridors of a primary school. Scripted by and starring the children.


'Roseo and Julius' - Year 5, July 2017
When two tribes go to war. Or, make that classes. This was the first full-length Shakespeare film I have made with primary school children. Script and ideas by the children.

In this continuation of the sci-fi epic, the Sith, the Jedi and a group of vile bounty hunters are on a quest to reclaim the legendary Shadow Saber - a weapon of unspeakable power. Who will get their hands on it first and claim the ultimate power in the galaxy? This film was written, designed and performed by twelve children from two primary schools in Leeds.

The Island - Year 5, July 2017
When the man arrives on 'The Island' it changes the lives of the islanders forever. Inspired by The Island by Armin Greder, this documentary film explores the reactions of people to migrants, refugees and those in need. Script and filming by the children.
CREATIVE WRITING


Night of the Gargoyles

The fabulously creepy Night of the Gargoyles by Eve Bunting was the perfect inspiration for some spooky gargoyle artwork. Scroll down to watch the audio-books that we recorded from our gargoyle stories... 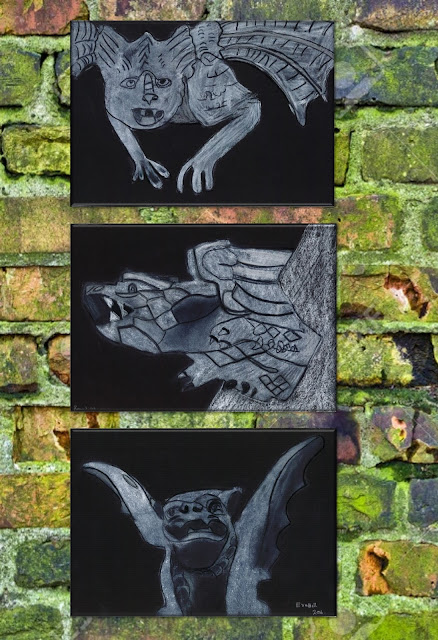 The Freak Show by Belma (Year 6)

The Spooky Night of the Gargoyles (by Elzio, Year 6)

These beautiful willow paintings were done in the style of Japanese woodblock prints and accompanied our excellent work to celebrate the Japanese cherry blossom season (Sakura). 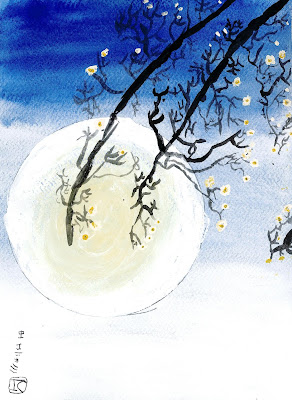 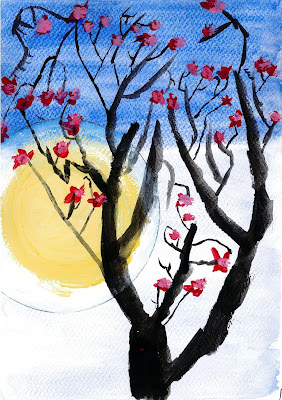 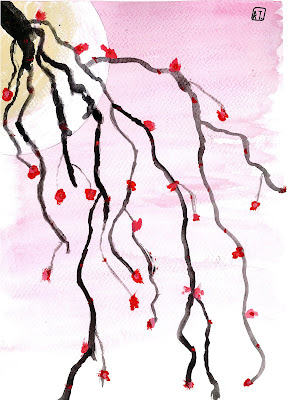 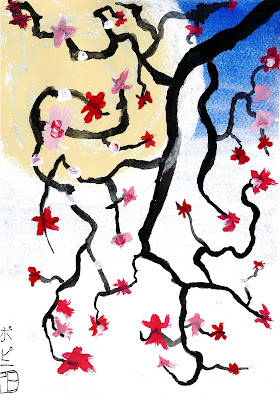 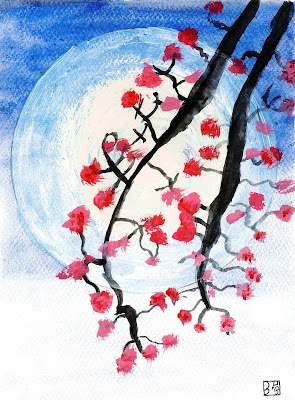 A few weeks ago, in a primary school not far away six boys were chosen to take part in a Star Wars creative writing workshop. This work challenged their imaginations, their writing and drawing skills and - most importantly - their understanding of how writing can be fun and worthwhile. To accompany their original stories (see my BLOG POSTS) for information on this, I taught the children some basic drawing skills: shading, colour and inking. These practise illustrations were a chance for the children to put those skills into action. 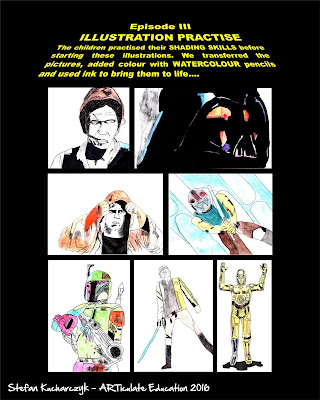 This workshop was all about character development. Using the The Arrival's story of a family separated as they prepare for a new life in a safer country - based on the story of emigration to the United States in the 19th and 20th centuries - the children imagined themselves as fellow migrants. Deciding what their character should take was a creative challenge as they sought to breathe life into their storytelling. The items were chosen specifically for their character's personalities and situations and arranged artfully. The sepia filter put on the photographs reflects the style of Shaun Tan's illustrations. 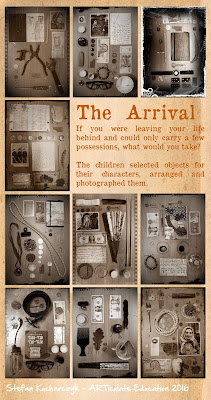 History Focus Week - Leeds primary school, Year 5.
The Vikings - February 2016
Building on the children's work on the Vikings during their history topic week, I decided to put the rich vocabulary they had been learning to good use with these fantastic word-art portraits. We discussed the meaning of Viking runes and the children matched an appropriate symbol to an image: strength with a horse, protection with a helmet, fire with a dragon. The children charcoal-transferred an image onto a strip of paper (their first time!) and then used the vocabulary to fill in the lines. As a set they look very effective!

Creative literacy and art workshop - Leeds primary school, Year 4.
The Island (A Greder) - June and July 2015
Some examples of the superb artwork created by children during this workshop. The images show the processes children went through during the six week workshop: colours and mood, experimenting with charcoals and pastels to make seascapes, using pen to draw illustrations and self portraits. A great collection! 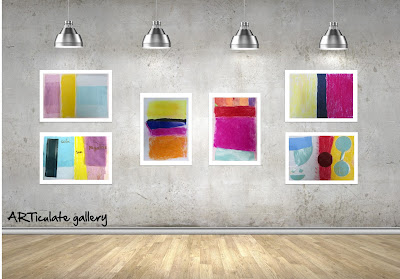 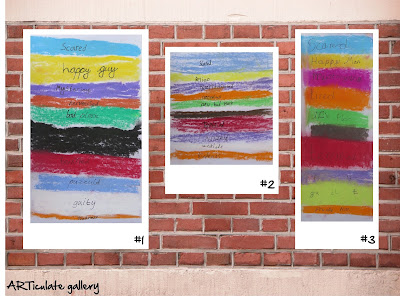 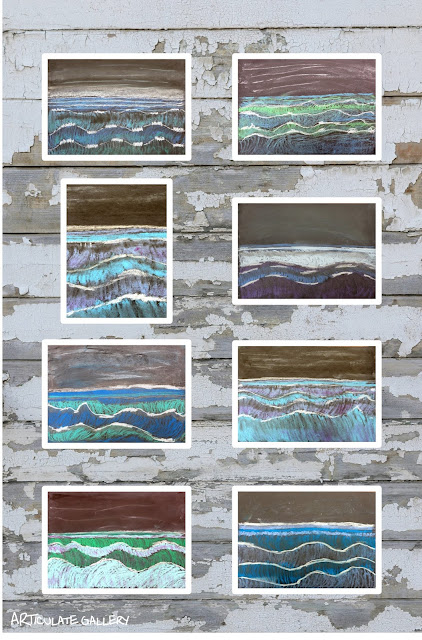 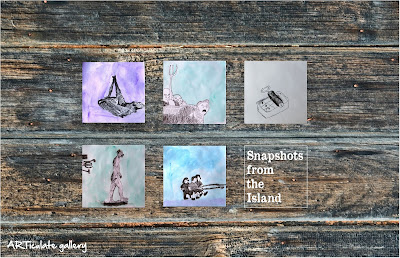 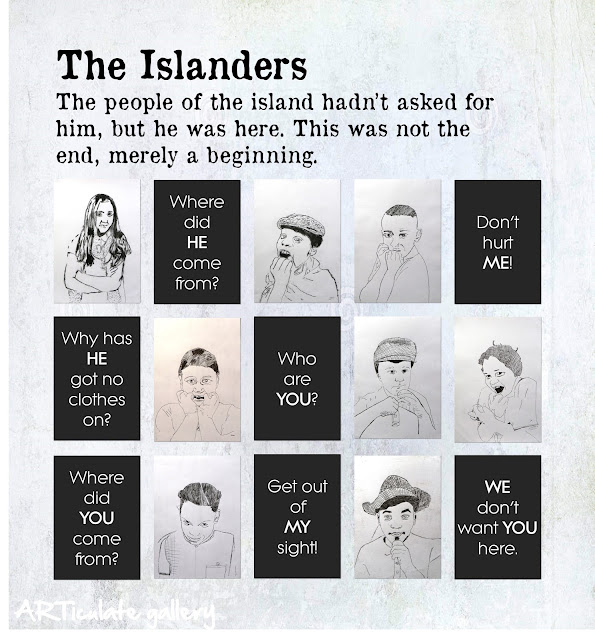 FREE taster workshop - Leeds primary school, Year 3 and 4.
Little Beauty (A Browne) - 15 May 2015
Some more examples of the superb mixed media artwork created by Year 3 and 4 children at a primary school in Leeds. 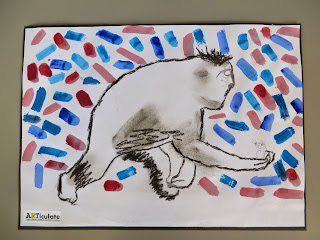 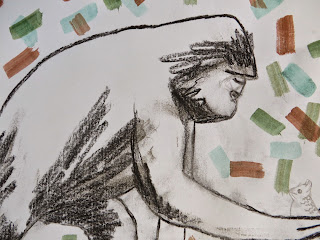 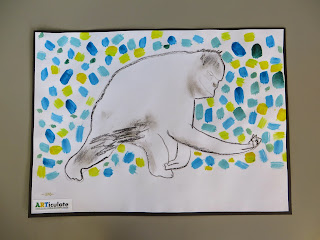 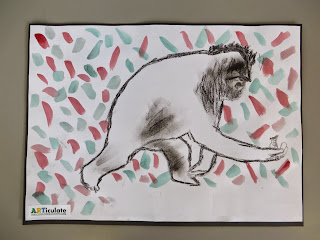 Using the illustrations from The Island by Armin Greder as our inspiration, the teachers created some fantastic pastel drawings.

Creative participation is a key part of all ARTiculate's workshops for people big and small! Little Beauty - Anthony Browne (Autumn 2013)
These images were created my Year 4 class (aged 8-9 yrs). This was the culmination of several weeks of work on the text exploring the characters, themes in the text and the language used. Working from the book's illustrations, the children decided how they would represent the characters' mood and emotions and which materials would be the best to do this. 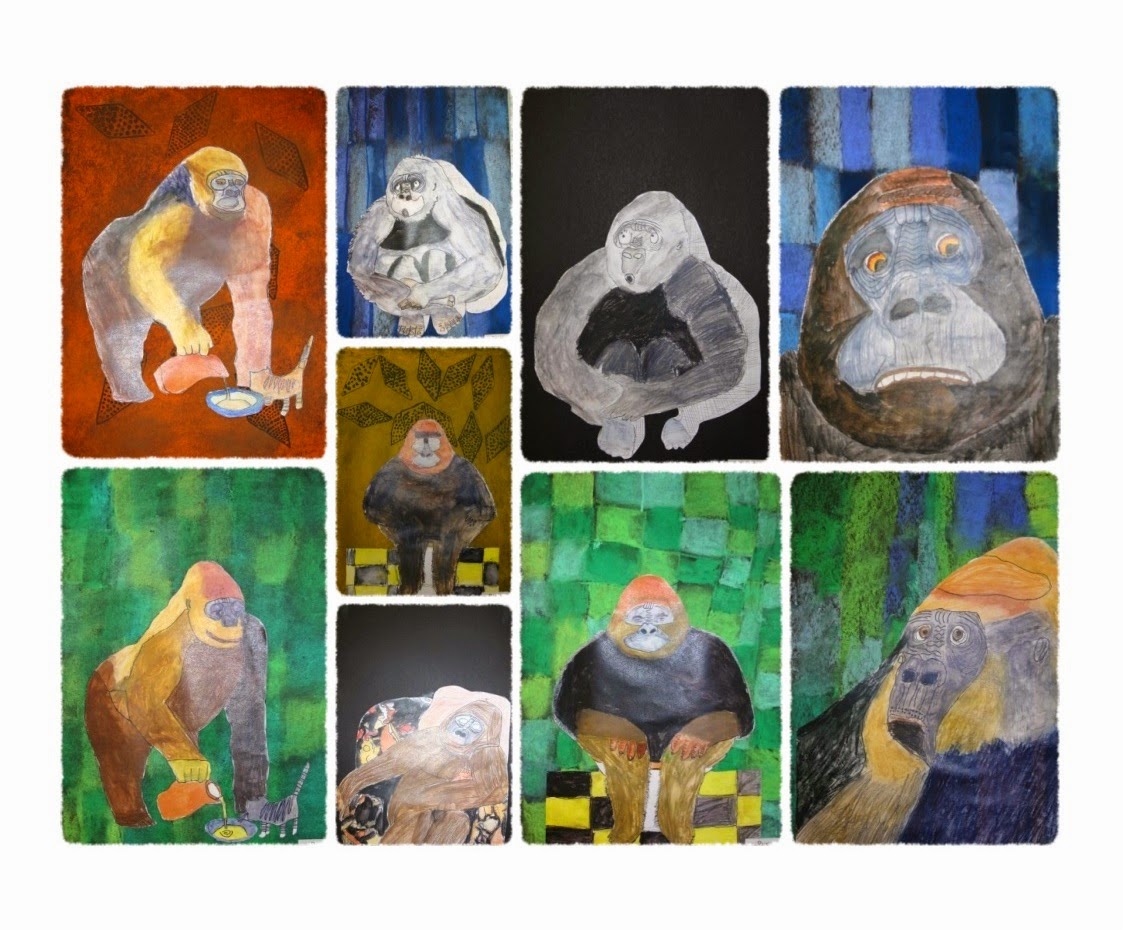 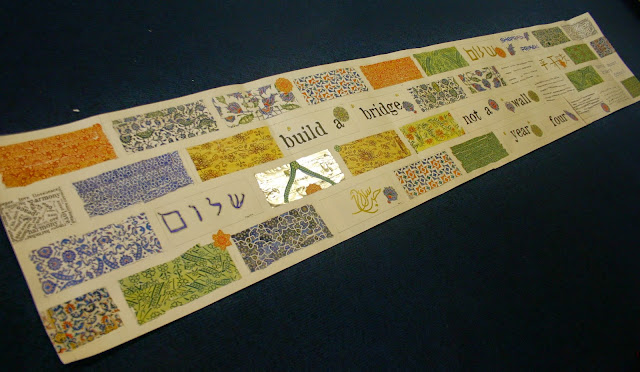 These spectacular, personal images were created by a Year 4 class as part of a topic on Jerusalem. After learning about the city and its attractions, we also looked at Jerusalem in popular art. The American street-artist Shepard Fairey explores the idea of peace from conflict and has work on display in Jerusalem's streets. In these pictures, created with ink and collage paper, the children are breaking down, peering through, pushing over or looking around the barrier to learn how other people live and how that understanding can help peace to grow. 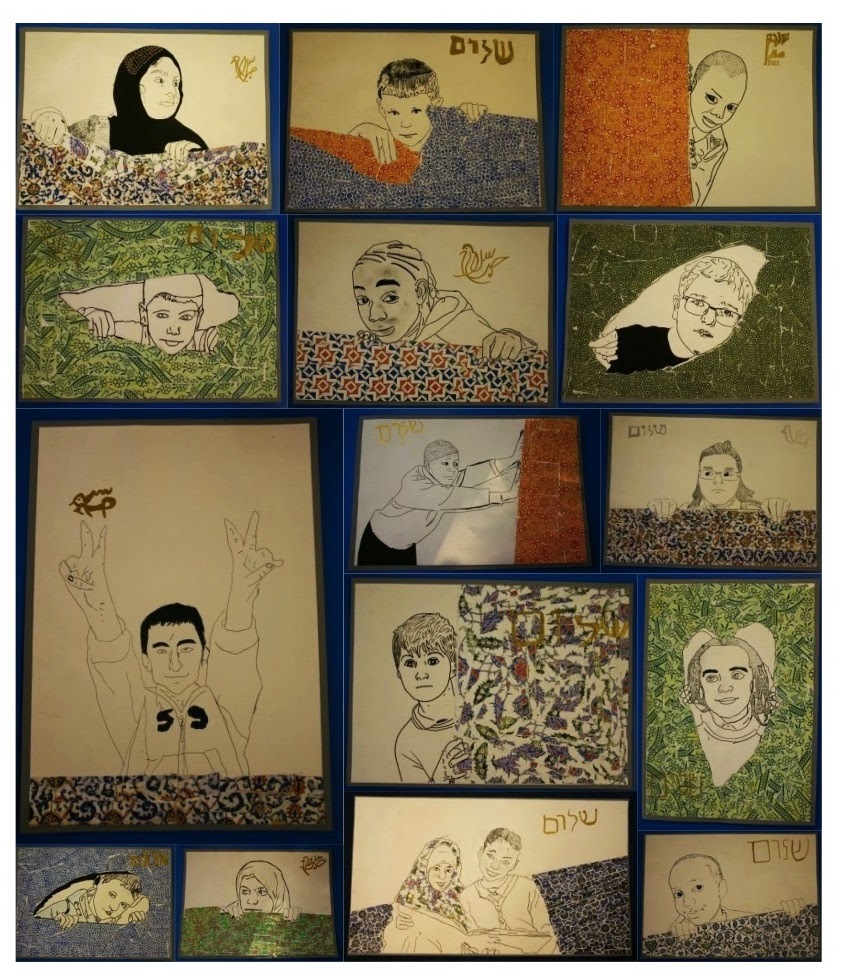 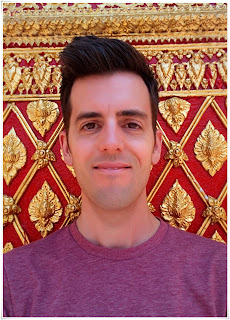 Hi! I'm Stefan - a teacher, researcher
and author with a
specialism in children's creative writing.

Find out more about me here.

The Great Wave - Creative writing workshop, Year 6 Week 1: Vocabulary development Inspired by Japanese artist Hokusai's masterpiece The Great Wave , Year 6 are starting on a creative voyage to bring the iconic print to literary life! We spent some time poring over the features of painting: the spray, the wave, the boats and, well hidden, Mount Fuji. After reading an account of Ellen MacArthur's sailing voyages, we began to generate some cutting edge vocabulary to give our writing some sparkle. This was the process: Children labelled the features of the picture, including parts of the wave (crest, barrel, swell, lip) We chose personified verbs for the different features. 'Grabbing', 'scratching' and 'grasping' for the finger-like lip of the wave; 'screaming', 'slapping' and 'whistling' for the wind. The group selected similes for each of the features. The wind became 'a bellowing dragon', the boats w
Read more

Drama is an integral component of primary English teaching. It is the engine that drives creative responses to stories, helping children explore characters, settings and predicaments. Yet the primary National Curriculum for England (DfE, 2013) makes scant reference to drama. Some generic guidance indicates the importance of speaking, listening and performing although these points are both too obvious and too generalised to be useful to teachers and subject coordinators hoping to embed drama across the whole school. When writing our forthcoming book, Teaching Shakespeare in Primary Schools: All the World's a Stage (Routledge, David Fulton, 2021), both Maureen and I felt that whole-school drama guidance for primary teachers - so integral to teaching Shakespeare's plays - was notably lacking from online resources currently available (apologies if you have produced such a document but we could not find it!). We decided to compile our own. In fact, you may have found this blog post
Read more

A treat for the final half term - a new workshop at a delightful school in Leeds! This half term I am working with two Year 5 teachers to develop a cross-year group, cross-curricular writing project based on my favourite picture book, Armin Greder's The Island . I've done this book many times and every time the response is different! This week, we got to grips with the facts, possibilities and mysteries of the story. What do we know about the story so far? (we only ever read up to page 6 to leave it on a knife edge...) What doesn't this story tell us and what could we infer or predict?     We looked at the crowd of islanders who 'welcome' the stranger's arrival. As in every class, country or community, no group ever sees the world the same way and we discussed how the islanders might react differently to the man. Is he a poor thing who needs to be rescued? Is he a curiosity? Is he a threat? We each adopted an islander and took on their perspective f
Read more