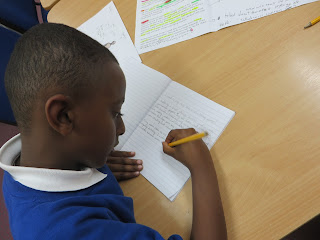 Lessons on vocabulary gave us a clutch of exciting new words to try out; the drama let us explore the man's inner thoughts; the art work had given us a mood to recreate. It can take time to immerse children in another world, but it is certainly worth the wait!

After three workshops worth of discussing, acting, playing around with language, making notes, analysing and discussing how in fact you might catch a seagull to eat it*, we were ready to pour out ideas onto paper in a first draft.

Analysing a text had given the group a five paragraph structure that they were going to follow to explain these mysteries, unanswered by Armin Greder's sparse text:


The narrative would be in the first person: the children retelling events through the man's eyes. It is his 'message in a bottle', his last words before being swallowed up by the Island and it's mysteries.

It was incredible to see the children's creative responses to this task as they planned, designed and brought to life an imaginary but credible story that fills in the gaps of the original.

The vocabulary lessons had given the children a clutch of exciting new words to try out; the drama had allowed them to explore the thoughts in the man's head; the art work had given them a mood to recreate.

It can take time to immerse children in another world, but it is certainly worth the wait!

Here is a brilliant extract from one child's work where the man, a secret agent on a rescue mission, realises all is not going to plan...

These fantastic ideas, all the product of imaginative discussion and drama that drew on the author's interests make an excellent first draft. Well done to all the children for their hard work!

Next week, we will take these rough diamonds of a first draft and polish them until they sparkle.

*We are in agreement that to catch a seagull to eat it, you have to lie flat on your raft to set a trap, wait until a seagull dive-bombs into the sea to grab a juicy fish and then, before it escapes, snatch it with your hands. But you have to eat it raw. Remove feathers before eating. Yum yum!